Find this article at:
go.ncsu.edu/readext?860059
— Written By Mark Hoffmann (3 months ago)

In collaboration with AWIS Weather Services

This year’s season has been so far characterized by fluctuating temperatures, often with heavier winds and rain in between temperature changes. Unfortunately not a lot will change in the next 7-10 days. We are facing increased frost threats in VA and Western NC on Tuesday, extending in the entire region on the night from Tuesday to Wednesday. Predicted min. temperature for areas in the Yadkin Valley as well as the Foothills are between 30-34 F.

Rain is in the forecast for Monday, and heavier winds will slow down over the day of Tuesday. However, protecting tender tissue on Tuesday morning with overhead irrigation will be difficult, depending on your local wind speeds. This might be a night for frost dragons, especially in VA. NC will see most of it’s frost on Wednesday morning. Wind machines as well as overhead irrigation will be able to help on Wednesday morning, when the lowest temperatures are being predicted.

It is important to look at your local predicated weather (see below), especially for Wednesday morning.

A fast upper level flow over the Northern 2/3rds of the USA will
keep weather changing over the next 1-2 weeks, as multiple fronts
combined with multiple upper level disturbances move across the
country.

The next frontal boundary will move through early this weekend.
Best rain chances with that will be over Southern areas, where
locally one inch of rain is possible, but most areas closer to
1/2 inch or less.

Briefly cooler behind that for late this weekend into Monday morning.

Then the next potential rain making system will come later next
Monday, with low pressure possibly developing and moving NE along
the Carolina coastline. This could result in some local rain
totals of an inch or more, mainly closer to the Atlantic Coast.

Behind that a brief surge of colder air again, with a threat of
frost a little further South into the Carolinas, mainly next
Wednesday morning.

Potential for some patchy to scattered frost as early as next
Tuesday morning in the more Western areas along the Appalachian
foothills.

Then a warming pattern for the middle-end of next week, along
with dry weather.

Looking further ahead, next threat of some showers and storms
about 10 days from now, around April 25-26 followed by another
cool down, mainly for the Mid-Atlantic, with some potential frost
risks around April 27-29 time frame.

Updates next week and after as needed. 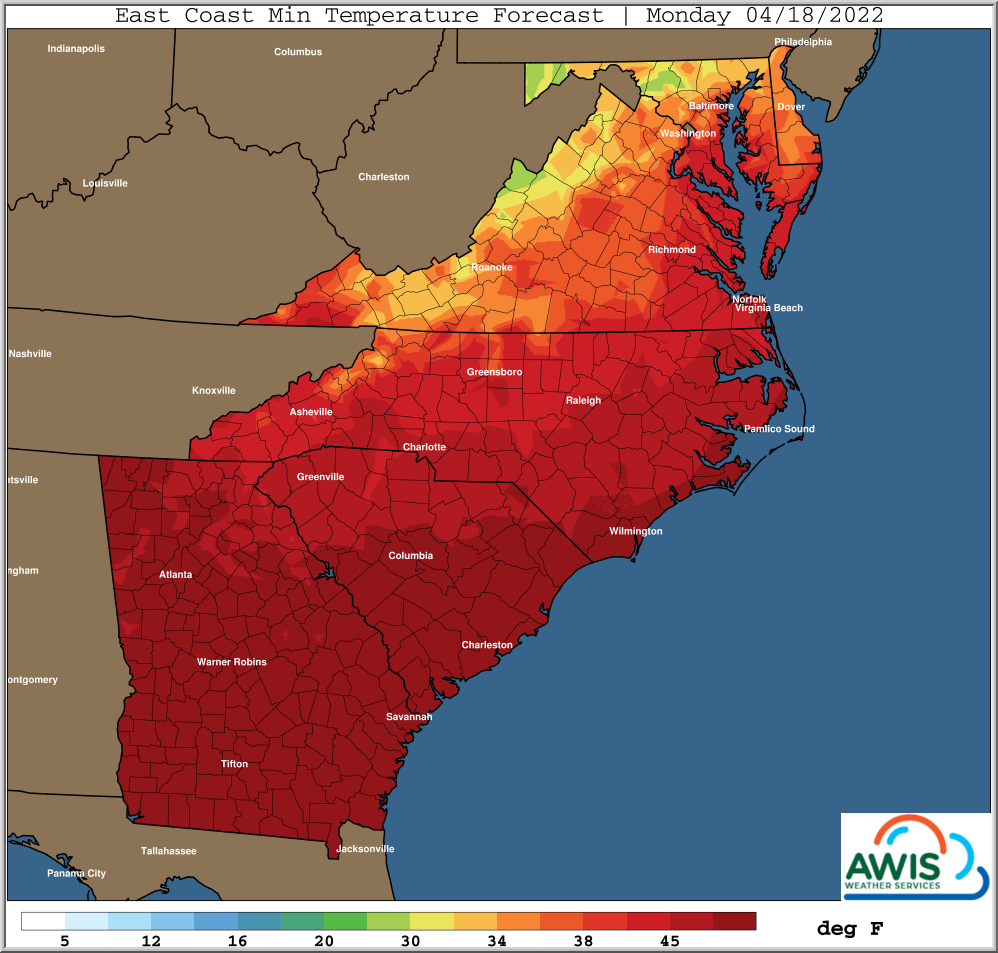 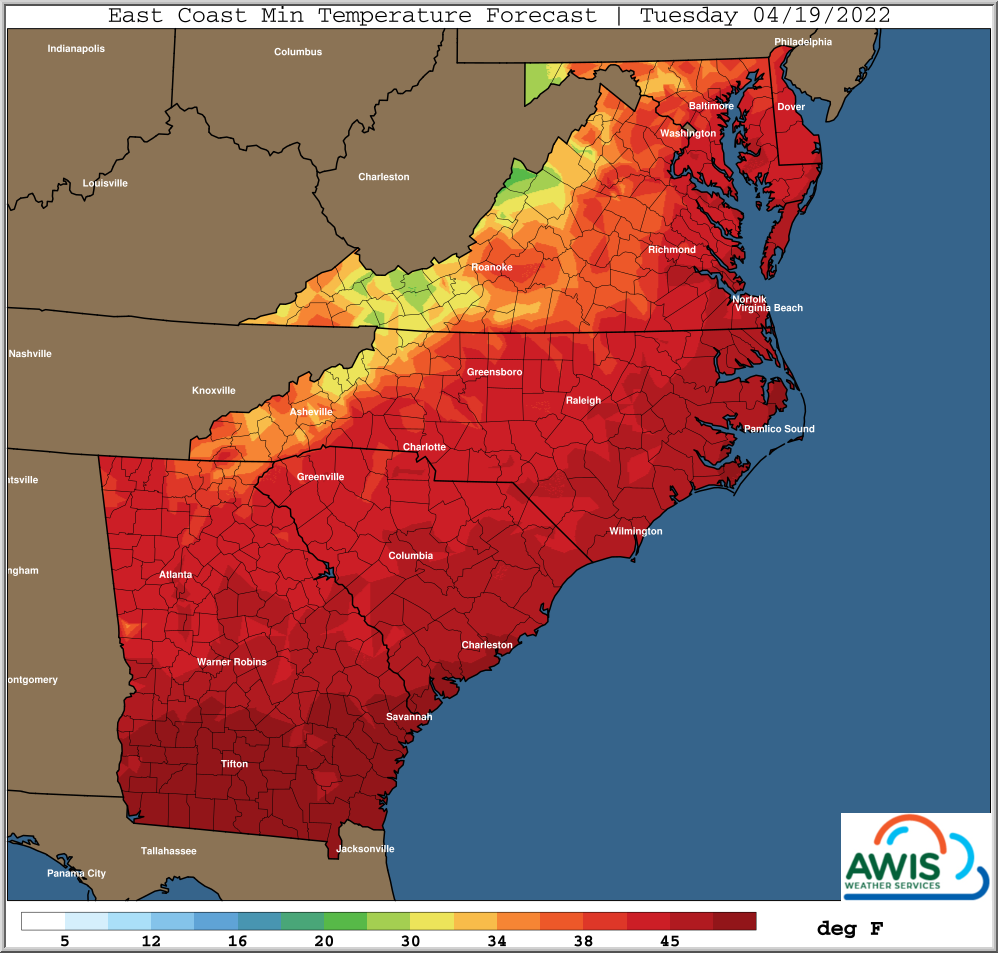 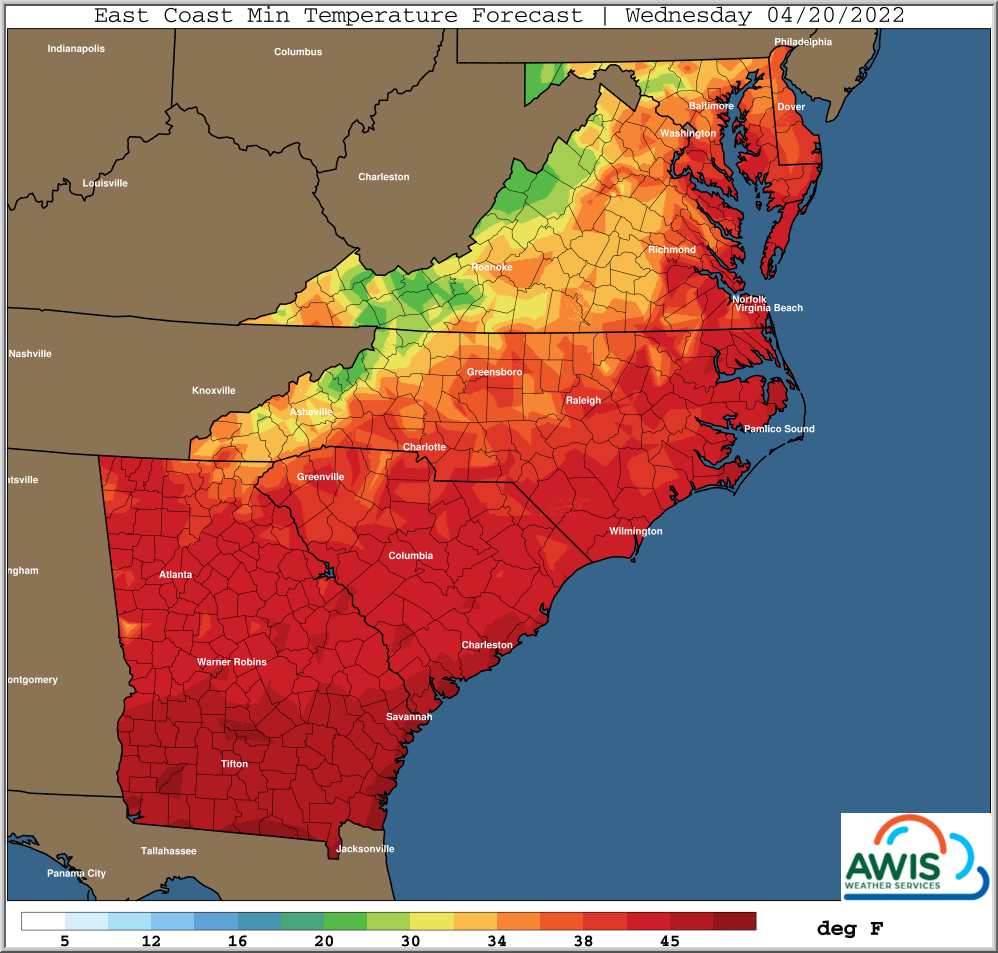 Please look at your regional weather forecast. In some areas, you might dodge the bullet and temperatures do not lead to frost damage. However, especially the night from Tuesday to Wednesday will be important to watch. The good news is that this will be a typical frost night, in which wind machines, overhead irrigation and frost dragons will do the job.

There is more wind in the forecast for the night from Monday to Tuesday however. While predicted temperatures won’t be nearly as low as the night from Tuesday to Wednesday, weather conditions will make it more difficult to protect your crop.

Please ALWAYS look at the predicted temperatures, dew points and wet bulbs for your specific region, and keep wind and rain in mind.

We also have a few other email lists you can subscribe to.